For six years, eckfactor managed the PR and social media for the annual ASTRA Awards. The agency was responsible for building the brand from almost zero public awareness to one of the country’s much loved red carpet events for the television industry. 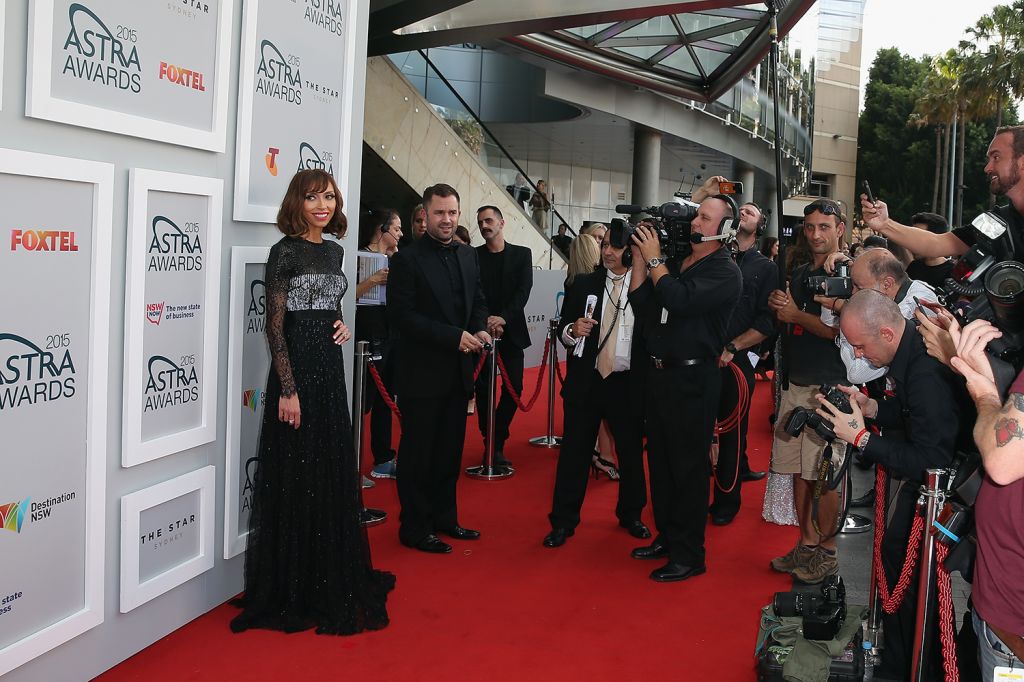 Reaching in excess of 540 million people, eckfactor’s PR campaign delivered the best results since the Awards inception in 2003 with the 2015 ASTRA Awards anticipated by media more than ever before evident through pre-event coverage growing by more than 190%.

More than 120 accredited media attended – with others attending ‘socially’ by tracking the hashtag and official ASTRA Awards accounts – to report on all the glitz and glamour of subscription television’s night of nights.  They were treated to a dazzling red carpet with local talent Jennifer Hawkins and Kerri-Anne Kennerley as well as international television stars Giuliana Rancic and the cast of Dance Moms.

For the National Rugby League, their glittering night of nights is the annual Dally M Awards.

This celebration of the best players in the game was traditionally attended by rugby league stars and their partners, but not the wider celebrity and VIP community.

Two years ago that all changed when eckfactor was engaged by the NRL to lift the image and presentation of Dally M Awards night, and bring a new level of prestige and glamour to the Red Carpet.

Innovations by eckfactor have brought a “sophistication transformation” to the prestigious awards: attracting celebrity football fans to attend and blog enthusiastically from the Red Carpet; locking in presenters for the awards; and literally dressing up the evening with priority attention to wardrobe and styling.

Hair and beauty sponsorships negotiated by eckfactor now bring more than $40,000 worth of “contra” services to the Dally M Awards.

eckfactor set up and managed a WAGS Styling Suite for team captains, wives and girlfriends to take the pressure off being Red Carpet-ready. The ladies were fitted with designer gowns, hair-styled and made-up in a special location. The WAGS Styling Suite has proven so popular that it’s now an essential part of the pre-event schedule.

eckfactor worked closely with the NRL’s media partner, News Limited, to raise the bar with its coverage of the event. Wide access to league stars and their partners, ideas for content and storylines, helped to generate 10 pages of Dally M Awards coverage in The Daily Telegraph (Sydney’s best-selling daily).

In his column, Daily Telegraph Editor-at-Large, John Lehmann, summed up the growth and evolution of the Dally Ms over the past two years, writing:

Sydney’s business elite and sports powerbrokers who pulled on tuxedos and the latest haute couture to walk the red carpet at the Dally M Awards on Monday night have brought a sophisticated edge to the greatest game of all.

The verdict was this year’s Dally Ms nudged the bar even higher, with the joint ­efforts of the NRL, Fox Sports and The Daily Telegraph amping up the star power and creating a TV event worth watching.

“The Dally Ms have really come a long way in just the last two years,’’ he said. “It’s developed from a Town Hall-type event to something with real prestige.”

In addition, eckfactor worked closely with the NRL’s own media team to leverage social coverage of the Dally M Awards outside the sports pages, and spread the news coverage.

eckfactor worked with the Australian Museum on its two showcase presentations for 2014: the Award Dinner for the Eureka Prizes, and the opening of the landmark Aztecs Exhibition.

These major events were held on consecutive nights, requiring meticulous planning and a streamlined approach to generate maximum interest for each one.

The key objective for eckfactor was to expand the penetration of the Eureka Prizes beyond the science and news media by focusing on:

The social media strategy was highly effective, with Eureka Prizes trending at number two nationally just behind the release of the Apple Watch.

Furthermore, a streamlined process to edit images enabled quick upload and facilitation of news from the Eureka Prizes’ own social platforms.

This treasure trove of more than 200 sacred cultural objects provided a fascinating insight into the ways of life, beliefs and sacrificial rituals of the Aztec Empire.

To give this unique exhibition the promotion it deserved, and position the Australian Museum as an exciting destination, eckfactor invited a range of celebrities and influencers to the opening. The guest list was significantly boosted with celebrities in eckfactor’s own network.

The result: a fantastic buzz about the Aztecs Exhibition, both by word of mouth and on social media.